As of March 30, Westridge has moved to remote learning; as a precaution in response to the COVID-19 crisis, campus is closed until further notice.

Whatâs in a name? An outlook on the college game. 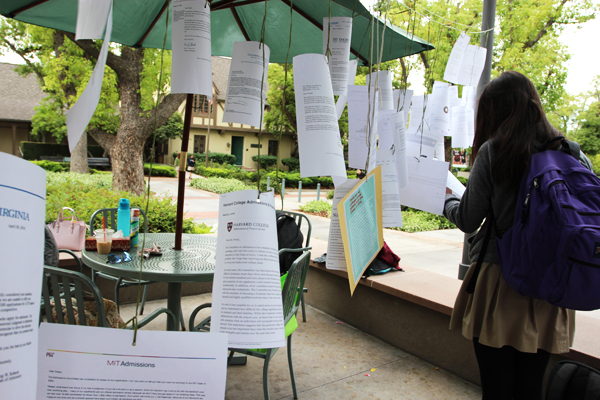 The following post is an opinion piece written by Marney Wood ’16 for the April 8 edition of the school’s Spyglass student newspaper.  As much as we – the royal we – recognize that this process is and should be intensely personal, the culture around college admissions over the past two decades has evolved to include a very public discussion focused on the “best schools” instead of the best schools for a particular student.  Marney provides great insight into what it feels like to be caught up in today’s cultural of college admission, which spans from the most personal exchanges to a national conversation.  Of note, Marney also led a campaign this spring to de-stigmatize being turned down from schools.  At Westridge’s College Commitment Day event, known here as Chalk Day, students hung letters of “non-acceptance” on a tree in the center of campus to demonstrate that denial is a normal part of the college admission process – all while celebrating the schools they decided to attend!

The day that lives in history: that one time I was asked by three complete strangers within two hours where I wanted to go to college. It started with the cashier at Vroman’s, then the optometrist found out I was a Senior, and finally a waiter asked that ominous question. Not only did they want to know about my dream school, they asked about GPA and SAT scores, as if they could have a clue whether I would get in.

At the beginning of the college process, I was determined to avoid becoming obsessed with names. I’ve always been competitive with myself and letting go of the notion that if I didn’t go to a NameBrand™ University I had lost some game was challenging, but I was resolved not to drive myself crazy by applying to dozens of schools in hopes of getting into the most competitive and prestigious school I could. Unfortunately, despite all my good intentions going into the process, I got caught up in the game of college admissions.

In October of my senior year I was constantly changing the schools on my college list, hoping to strike just the right balance of “safeties” and “reaches,” and just dying to get in somewhere that would impress my distant relatives when they asked where I was going at Christmas dinner. I knew logically that my grandparents, who applied to college in the 1950s, didn’t actually know
which school was best for me and only recognized names that they’d heard repeated hundreds of times, but I couldn’t seem to internalize this concept. No matter how much my classmates and I hated the process, we all fell victim to the game. If one person cared about going to a NameBrand™ University, it felt like they would think less of me if I didn’t get into one.

Suddenly when senior year started, the people around us couldn’t think of anything else to talk about except college. Replacing the weather, college became the new go-to small talk topic of everyone from family members to doctors to cashiers. While I tried to enjoy my Senior year and trust that I would end up happy somewhere, constant reminders were thrown in my face that if I didn’t go somewhere that impressed people who barely knew me, I wasn’t good enough.

Of course NameBrand™ Universities are the right fit for some people, and they are fantastic universities. We all know the schools I’m talking about - the ones your favorite TV characters go to despite never having time for homework, extracurriculars or standardized testing because of all the murders, fashion disasters, and coming-of-age proms. There’s nothing wrong with wanting to go to one of these schools. My point is simply that today’s culture surrounding college serves to communicate to students that the ultimate goal is to attend a NameBrand™ University, even if there is another school that is a better fit for you as a person.

No matter how many times people tell us that “it will all work out” and we will “end up at the right place for us” - statistics don’t lie. When a school has a 10% acceptance rate, that means there’s a whopping 90% of applicants who don’t get in. On one hand, we spend years obsessing over GPAs and SAT/ACT scores. But once the applications are submitted, we are told to forget the numbers and to have faith that we will end up in the “right place.” And what is the “right place” anyway? Is it the most prestigious university I applied to or is it the school that has programs that I love and seems like a perfect fit but that doesn’t elicit a “Wow” when I tell the cashier at Vroman’s where I’m going?

At some point in the past few months, the order of my top schools changed from which school I thought would be the best fit to which school I would be the proudest to say that I was attending. This wasn’t because I suddenly cared about going to a NameBrand™ University more than I cared about being happy. This wasn’t because “kids these days” drive themselves crazy and we should all just go back to the time before cell phones or TV when people applied to two schools at most. This was because I wanted to win the game. And who doesn’t love winning? It’s not because I want to see other people lose. It’s because the college application process has become a game that we are forced to play as early as Lower School.

This is not a problem that is unique to Westridge girls - it’s an issue for students at competitive schools all over. At any school like Westridge, there’s going to be pressure surrounding college. People constantly ask us where we want to go and then wonder why we’re all so stressed about it. Spoiler alert: maybe we wouldn’t be so stressed if you stopped asking us about it. My final year with the friends and family and life that I’ve had for 18 years has been taken over by this game .

I wrote this article before I heard back from the majority of the colleges that I applied to. As of now, I have heard back from everywhere and I am in the process of deciding where to commit. I stand by everything that I said and I only have one thing to add: I am happy for myself and I am excited for the next four years. My only hope is that my family, doctors, and the cashier at Vroman’s can be happy that I’m happy, regardless of whether they’ve heard of the college that I decide to attend.

This is a blog with variety. I really liked it. enjoyed reading the blog. Good work. Keep it up. Keep sharing like this in the future as well
Your blog is so interesting all your essays are original and informative for me. your blog writers are highly qualified and professionals.In this post is really nice to read, I am very happy to read this story. Wonderful post is this.Thank you so much for your kind words.
visit : top essay writing service
from Beverly Alcock on 06/21/17 at 11:49PM
This is an excellent post and I really love it. Students should get the higher education and then make a successful future because education is very important for us and If any assistance about education or writing project so they can take help with dissertation writing services. They are very reliable for the students and also their have all types of solution by the student problems
from Ahmed Khan on 07/14/17 at 01:33AM
< back  |