From the very beginning, Westridge was ahead of its time.

The world held a much different view of women 100 years ago when our founder Mary Lowther Ranney (1871-1939) opened a school for girls. It was 1913, and women were still denied the right to vote in U.S. elections. But two Pasadena mothers who believed in more for their daughters urged Ranney, an architect and teacher, to create a school that could offer an education for college-bound girls.

Almost immediately, enrollment exceeded expectations. Ranney intended for Westridge (named for the ‘west ridge’ of town) to be located at the home she shared with her parents on State Street. As a result of the overwhelming registration of 21 students during the summer of 1913, the Ranneys acquired a larger house on Madeline and opened the doors of Westridge.

From day one, Ranney intended for Westridge to be a school that prepared girls for college.

Just as Westridge was originally mandated by parents, it has been preserved and expanded by their efforts. When Miss Ranney retired in 1936, a group of parents bought the school and chartered it as a nonprofit institution with a board of trustees. Over the years, the campus has grown to keep pace with the educational needs of a thriving school.

Beyond the physical improvement of the campus, Westridge has also cultivated social and academic progress. Implementation of key programs has matched or exceeded the social progress women and minorities have made during the last century.

In its next century, Westridge School envisions preserving the best of an illustrious reputation while being innovative and flexible as we respond to the challenges of the future. Our founding values continue to provide the framework of educating young women whose joy in learning leads them to meaningful lives as contributing global citizens. 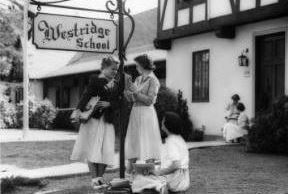 1940s: By 1940, Westridge had more than doubled the school's grounds with the purchase of the first Ranney House.

1960s: The school launched a program encouraging minority enrollment, which now constitutes half of the student body.

1990s: Technology became integrated into academic life in the 1990s.

2000s: In 2005, Westridge celebrated its unwavering dedication to the arts with the opening of the Fran Norris Scoble Performing Arts Center.