<Back to News
Perspectives in Literature: The English Elective that Tackles Learning from All Angles

Besides the usual suspects in an English classroom, on any given day in the Upper School English elective Perspectives in Literature: Signs, Systems, and Codes, you might also find a science teacher, a theatre teacher, and a history teacher facilitating a discussion with students. Why? Because Perspectives in Literature is not a run-of-the-mill English literature course; it's an interdisciplinary class that asks students to approach and analyze literary texts through the lenses of literature, science, history, music, and art. The class, now in its sixth year, is co-taught by a variety of Westridge faculty and even the occasional guest lecturer. 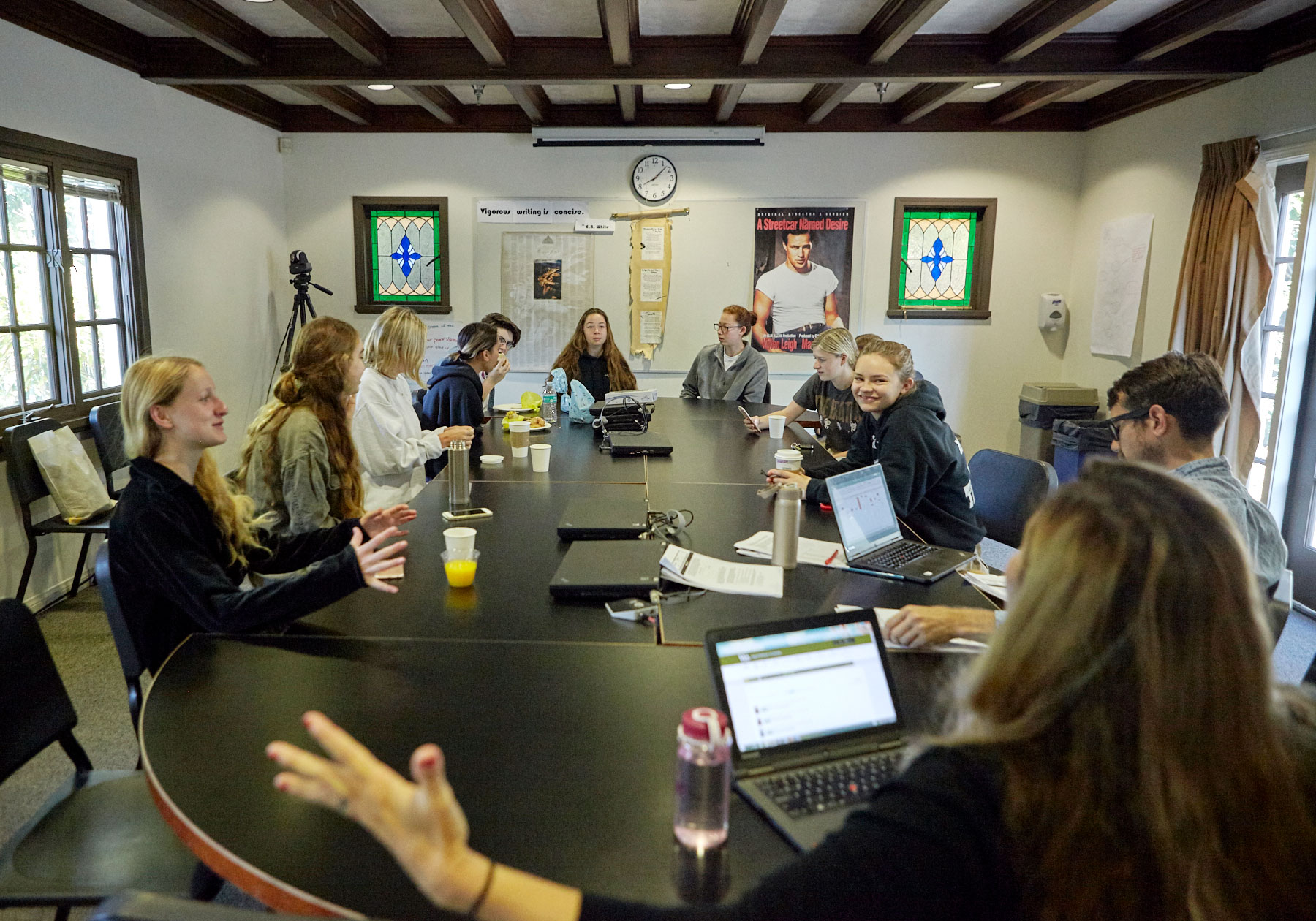 Above: English teacher Tarra Stevenson and science teacher Ryan Skophammer facilitate a roundtable discussion on the theme of Monsters during the 2016-2017 Perspectives class.

“Interdisciplinary learning happens inherently at Westridge, as the students make connections between the disciplines all the time. However, we did not have a specific class dedicated to this line of inquiry and felt it was time,” said Tarra Stevenson, who co-designed the course with English department chair Dr. Jessica Bremmer. “The blended format of the class and its use of three teachers and disciplines is an innovative way to engage our students. And, since the class explores other disciplines through the lens of literature, it also enhances our humanities offerings by providing students with an additional experience beyond their required English courses.”

What's more, the Perspectives class focuses on a different theme every year, and previous topics have included Documentary/Memoir, Risk, Monsters, Weapons, and Black Female Voices (last year's theme). This year the theme is Disruption, which Dr. Bremmer's describes as a "study of literary and artistic acts of dissent." The class culminates in the annual Upper & Middle School Voices in Literature & Culture Conference, where students present work based on the year's theme.

"[Perspectives in Literature] was the hardest and best class I've ever taken," said Caroline P. '20, who presented at last year’s conference. "The amount of in-depth discussion and analysis of topics that are compelling and relevant is beyond anything I've ever experienced. I feel so prepared for the future!" 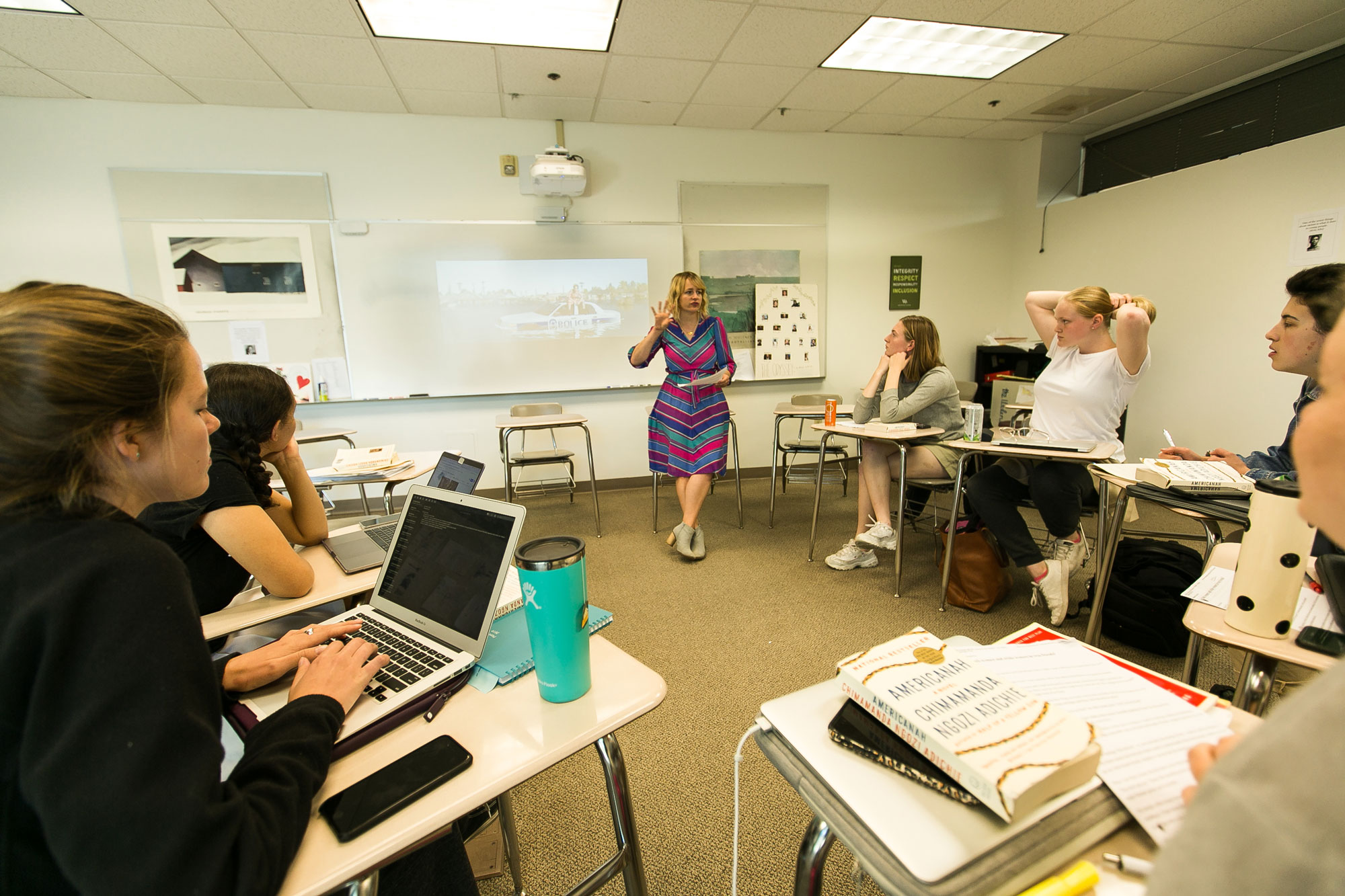 Though the course will always be rooted in literature, as it has grown, other disciplines have also been incorporated until the course began to include such subjects as dance, languages, and even film. "Having the class include so many disciplines showed that textbooks aren't the only reflection of history and society," said Jamie G. '20. "Art holds a lot of truth, too."

This fall, Dr. Bremmer is tackling a range of issues through her Perspectives curriculum on Disruption. Together, the class will be discussing banned books and writers in exile, reading (and possibly staging) works of "protest theatre," studying guerrilla art movements, and learning about the role of women in revolutions throughout history. Bremmer plans to incorporate such texts as Beloved by the late Toni Morrison, works by Walt Whitman, and the classic memoir Always Running by Luis J. Rodriguez.

"This course was risky," said Bremmer, "but Westridge has always been so supportive of it. And now that we're in our sixth year, our students really see the course as a way to become leaders in the humanities. They're huge advocates for the class - they are out there convincing each other to take it!"

"Being part of this class completely reignited my love of learning," added Gracie B. '20. "It's made me so excited to be here. And it makes me excited for college!"