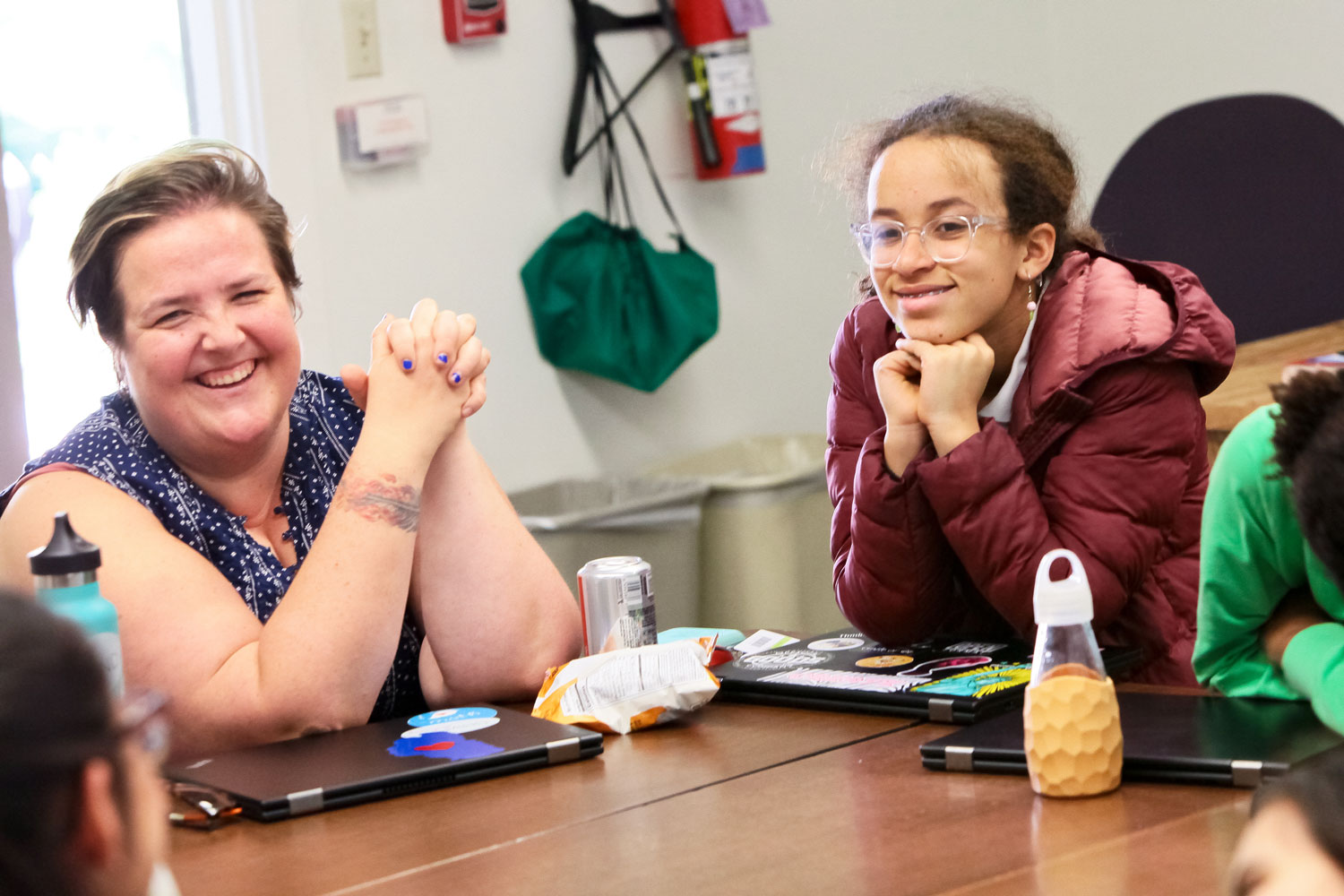 Valerie "Val" Brownsmith joined Westridge in 2017 to teach 7th grade mathematics. A graduate of Smith College, she earned her master's degree in administration from Concordia University, and has 10 years of experience teaching math and developing curriculum in the Glendale Unified School District. In this Q&A, find out more about her work at Westridge to make learning math a hands-on and all-around fun experience.

I’m from Pasadena but I went to Smith College in Massachusetts, which is a women’s college, and I loved being in a single-sex environment. I felt like it really gave me the opportunity to develop my own voice. After college, I came back to Los Angeles and I wasn’t sure what I wanted to do, but I knew I loved math so I started tutoring and later got my teaching credential. I taught in Glendale Unified for about 10 years. I was in the classroom for about seven and a half years [teaching 7th and 8th grade math], and then worked at the district level designing new curriculum for secondary math.

During that time I really missed teaching. I’ve known Karen Hanselman [Westridge P.E. faculty] for a number of years, and I’d visited Westridge before, so when this position opened up – it felt like everything came together. I came to Westridge’s campus for my first interview thinking I would just “check it out,” but I came home afterward and was like, “I HAVE to work there!” I loved meeting the girls and seeing how the community operates—and knowing that all of it was about empowering young women. It was exactly what I wanted to do. When I came to Westridge, I immediately felt like I’d found what I was looking for.

Oh my gosh, I love middle school. I think it’s the “Goldilocks” age! When they’re in middle school, they’re just so weird and they come up with crazy ideas and then they try them. They are totally willing to take risks and it’s so exciting. Middle school is my jam. 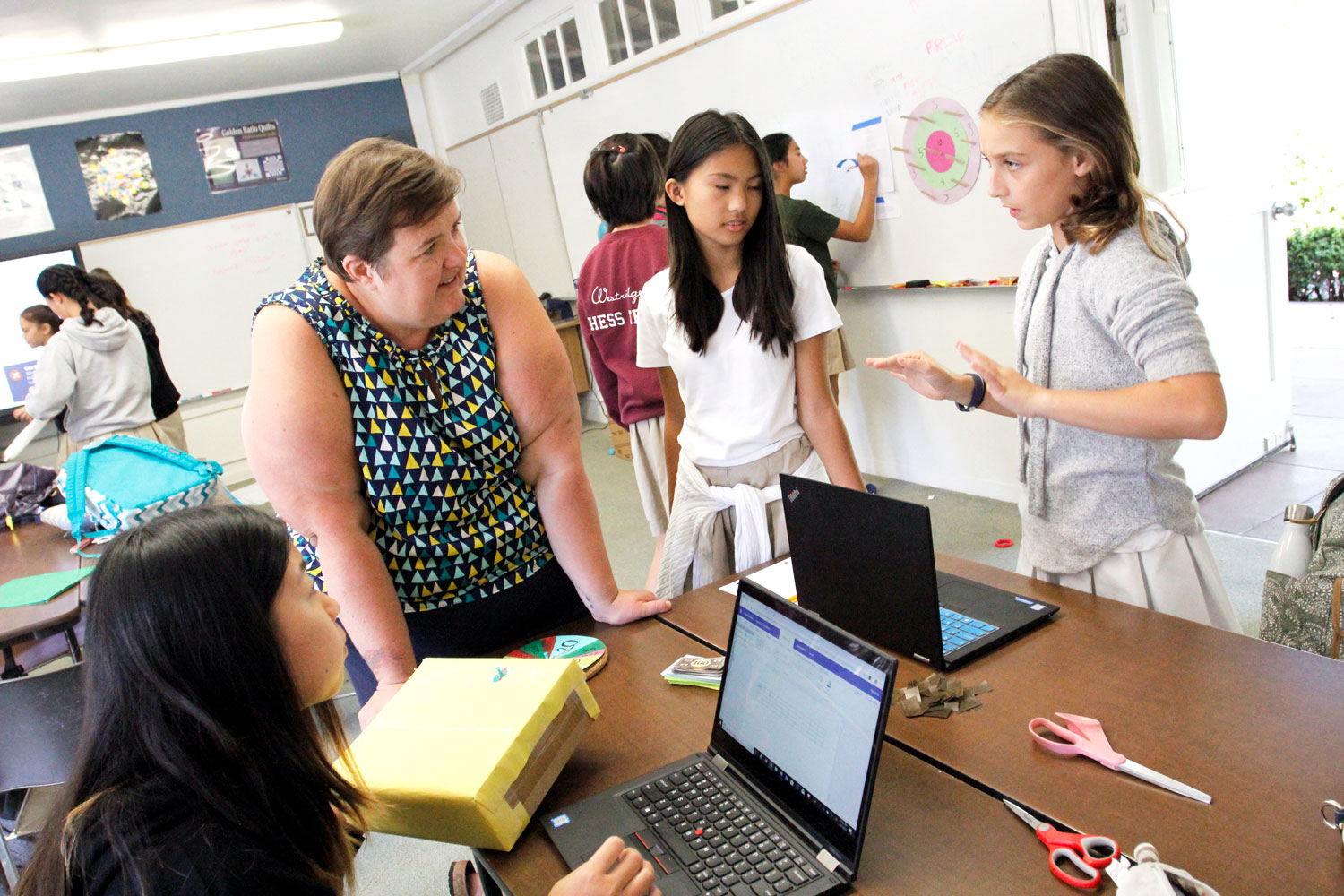 When I was in middle school and high school, I struggled with math. I thought it wasn’t clear, I didn’t understand the connections or why I was doing it. Plus, I felt very shut down (I think, unintentionally) by a teacher who made me feel like I wasn’t ever going to “get it.” And I got really angry! It was a challenging area for me, and I was a girl in a classroom where male voices were a lot louder. When I got to Smith College, I thought, “I’m going for it,” and I ended up minoring in applied mathematics. It was important to me to prove to myself that I could do it, after feeling like I was told that I couldn’t.

When I got out of school, I wanted to help open kids’ eyes and show them that math makes sense. Patterns make sense. There’s a whole world out there that you can understand mathematically, and it can be really exciting even if there’s not an immediate application (but there usually is – which I also love to talk about). I like being able to open students’ eyes when they think they can’t do something, but then realize that they can. It helps them build resilience.

When I was in school, I often felt a little lost and not very seen in a co-ed classroom. Going to a women’s college, I felt like I could be a bigger voice in the classroom and guide my education in a way that I didn’t feel like I could before. Having a setting like that, where you’re not as worried about the people around you and you’re getting to learn for yourself, is something that’s really unique to women’s colleges and girls’ schools. This setting empowers you to speak your mind, and not feel like somebody is going to cut you off or shut down what you’re saying without engaging with you. I don’t think I realized I missed that feeling until I came back to Westridge.

Also, I want girls to know that they can be great at STEM subjects. We joke in my family that I’m the “humanities” one, because my parents are both computer programmers and my sister and brother-in-law work for Google. My mom went to Mount Holyoke College (which is a women’s college) and was a math major, and she said she was a math major specifically because someone told her that women don’t major in math. It’s important to me to let girls know that this is an option for them, that math and science isn’t only for boys.

Tell us about your teaching philosophy.

Every kid learns differently, so I like to adjust how I teach a concept for a variety of learning styles. Recently, I was teaching them how to find the slope intercept of a line. Do you remember the equation y = mx + b? Some kids in my class wanted to look at the formula and a few examples and find the connection between them. But other kids need more of a hands-on approach, so we also went online and did a little investigation on a website called Desmos [Editor’s Note: Desmos is an online graphing calculator that also provides classroom activities and encourages students to create their own mathematical ideas on the platform.], where they actually typed in an equation and added a “slider” for b; then they moved the slider and saw how the graph would change as they adjusted the y-intercept. It was another approach to the same problem.

I look back at how I was taught something, and I see how the textbook approaches it, and then I think about what the actual concept is and how I can bring the concept to the kids too, and not just the formula. I think that a lot of times when we’re learning a brand new idea in math, educators tend to start with the formula, do a bunch of examples, and have the students practice it. But we’re missing an opportunity to ask kids why the formula works. When I teach math, my goal is for kids to retain more concepts from year to year because they understand the why behind it, and it’s not just some rule they memorized.

Talk about making mistakes in the classroom.

Sometimes it’s like pulling teeth, getting kids to admit that it’s okay to make mistakes in the classroom! Middle school is so interesting too, because a lot of comparison starts to happen at around that age, which leads to a desire to cover up mistakes and not talk about them, pretending like everything’s fine.

There are a couple things I do in my class to try to make mistakes a regular part of what we do. After every test, we make a mistake chart, where we look at the most common mistakes that happen. I present it like, “This is one of my favorite mistakes! Let’s look at it!” Everyone helps correct the mistakes, and they explain what the person did wrong. It’s all anonymous, so it feels to them like they’re helping a friend. The goal is to get them into the mindset of, “I’m helping someone out, but the person that I’m helping is me.” Girls talk to themselves very differently than they talk to anybody else. So I’m hoping that that language that they would use to explain something to someone else creeps into the way they explain it to themselves.

Also, when I give them their tests back, they don’t have grades on them. I want them to not worry about their grade yet – I want them to look through it and see what they understood and what they didn’t. That’s harder, because kids want to know their grades! But the grade isn’t the most important thing, and that’s why we do that. Mistakes aren’t world-shattering, and I’m trying to frame the mistakes so that they’re lower stakes.

Why should girls take math in middle school?

If you want your child to be an independent thinker, push through things that are difficult, and ask questions – she should take a math class. Parents sometimes ask how they can best support their child in a math class. And I say, by not answering their questions right away, asking them to use their resources and stretch themselves a little further. Middle school is a glorious, weird time in life to try things and make mistakes. And math class offers girls a way to do that.