Westridge is closed Friday, March 13 - Sunday, March 29, and will officially move to remote learning as of Monday, March 30.

Jay began volunteering with Ability First, a nonprofit that provides programs to support people with developmental disabilities, during her sophomore year. That same year, she read about a company based in South Korea that was making adaptability tools for people with physical disabilities. “I decided to reach out to them and ask them how their products were made, and they were kind enough to send a sample product over to me,” said Jay.

Jay took the tool to a group of girls ages 8-23 largely with motor disabilities (such as cerebral palsy) who had been identified by Ability First, and worked with them to test out the product. The tool itself was meant to help a user hold an object, such as a pen or pencil, steady enough to draw or write with it; unfortunately, both Jay and the participants found the product to be “not very user friendly,” with parts that broke easily or weren’t custom-fitted to the participants’ hands.

“I was taking 3-D Design at Westridge at the time,” Jay went on, “where I was learning about 3-D printing and how to design using the 3-D CAD (computer-aided design) software, and I just thought, ‘Why don’t I try making this tool myself?’”

STEAMWork Design Studio Coordinator David Prince, who taught Jay’s 3-D Design class, said that he worked with Jay in the studio over the summer before her junior year and again this past summer, helping her first attempt to make modifications to the South Korean tool and then supporting her as she decided to start entirely from scratch and create a prototype of her own. “It’s exciting for me as a teacher,” Prince said of working with Jay, “because oftentimes the connection between what you’re teaching in the classroom and how a student might apply it is so abstract. But seeing Jay’s ideas physically manifest as a design that she is testing and revising and testing again with real people, is incredible.”

The more she worked on creating tools for the Ability First participants, the more Jay realized that she had stumbled upon a passion that would become the core of her Community Action Project (CAP), the Upper School service learning project at Westridge that includes extensive research and field work over the course of four years, and culminates in a senior year presentation. “In the 21st century,” Jay said of the goal of her CAP, “there are so many technological advances that have been made. But I’m noticing that there are certain groups of people who, if they don’t have the resources to access technology, can get left behind. As a society, we rarely recognize the harmful effects that could leave on people—so I hope that my project would reach those underprivileged and underrepresented groups, to help them utilize technology in a way that can bring engagement to them and also allow them to do activities that they can enjoy.”

“One of the most important starting points for an engineer,” Prince added, “is the social, human aspect—to understand what the client or the person you’re working with needs, and to find out whether they have a problem that needs acknowledging. Jay has been doing that intuitively, working at Ability First with these participants. Rather than saying, ‘Hey, I’ve got a solution for you,’ before understanding the need, she has gone about it in the opposite way, listening to the feedback of the people she’s working with before trying to find solutions. That’s the underlying principle of true ‘design thinking.’”

For Jay, the entire experience has been deeply moving. “Working on this project, I realized that there are so many people out there who are engaged in addressing a cause they are passionate about. The opportunity to work with them and the participants at Ability First has been profound for me, because it’s encouraged me to take what I have learned in school and think of ways that I can use it to solve outside-of-school problems. If not for Westridge, CAP, and Mr. Prince, I wouldn’t have been able to move this project forward in the way that I have.” 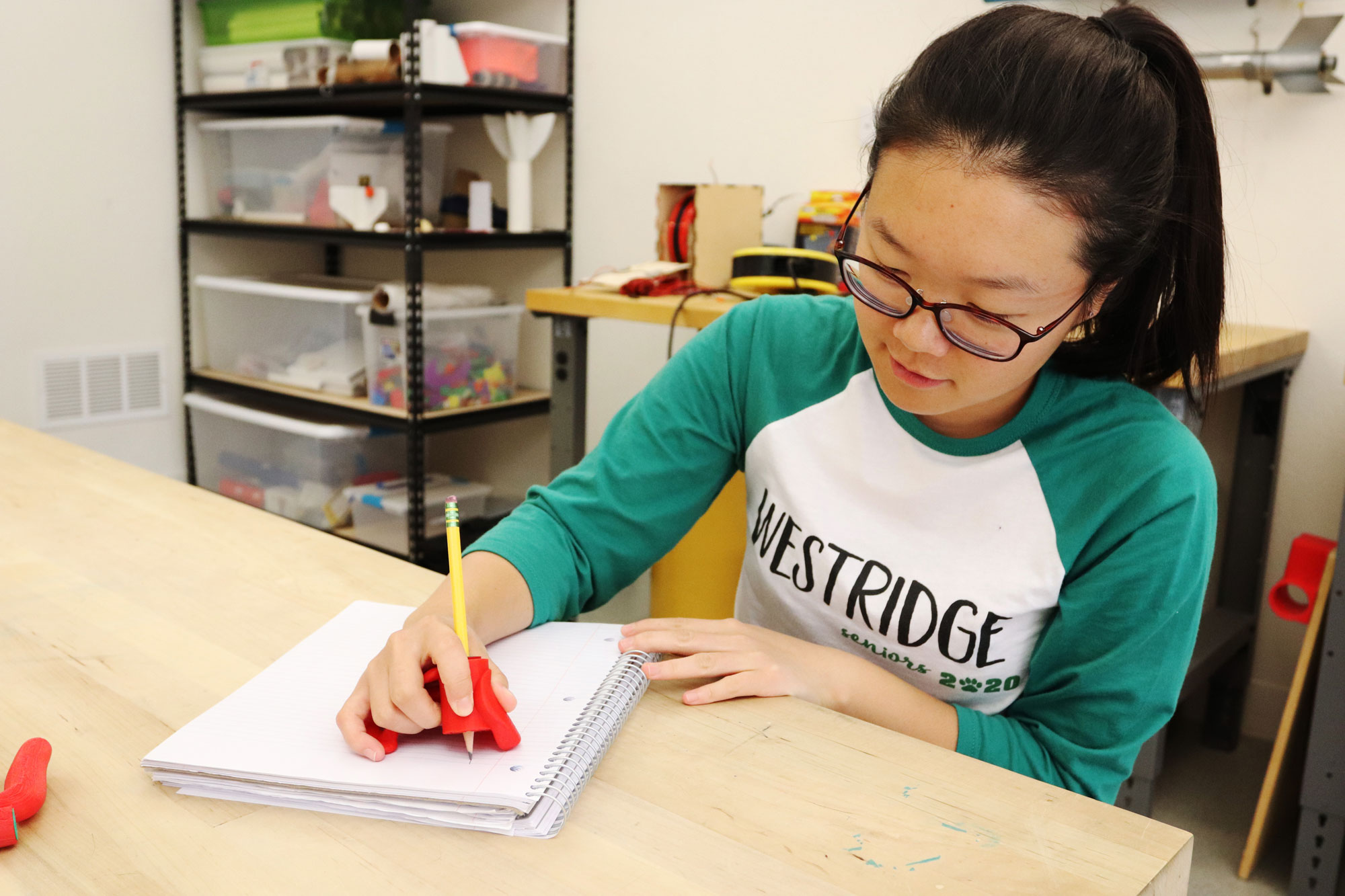 Above: Jay demonstrates how a user might work with a prototype of her writing tool.