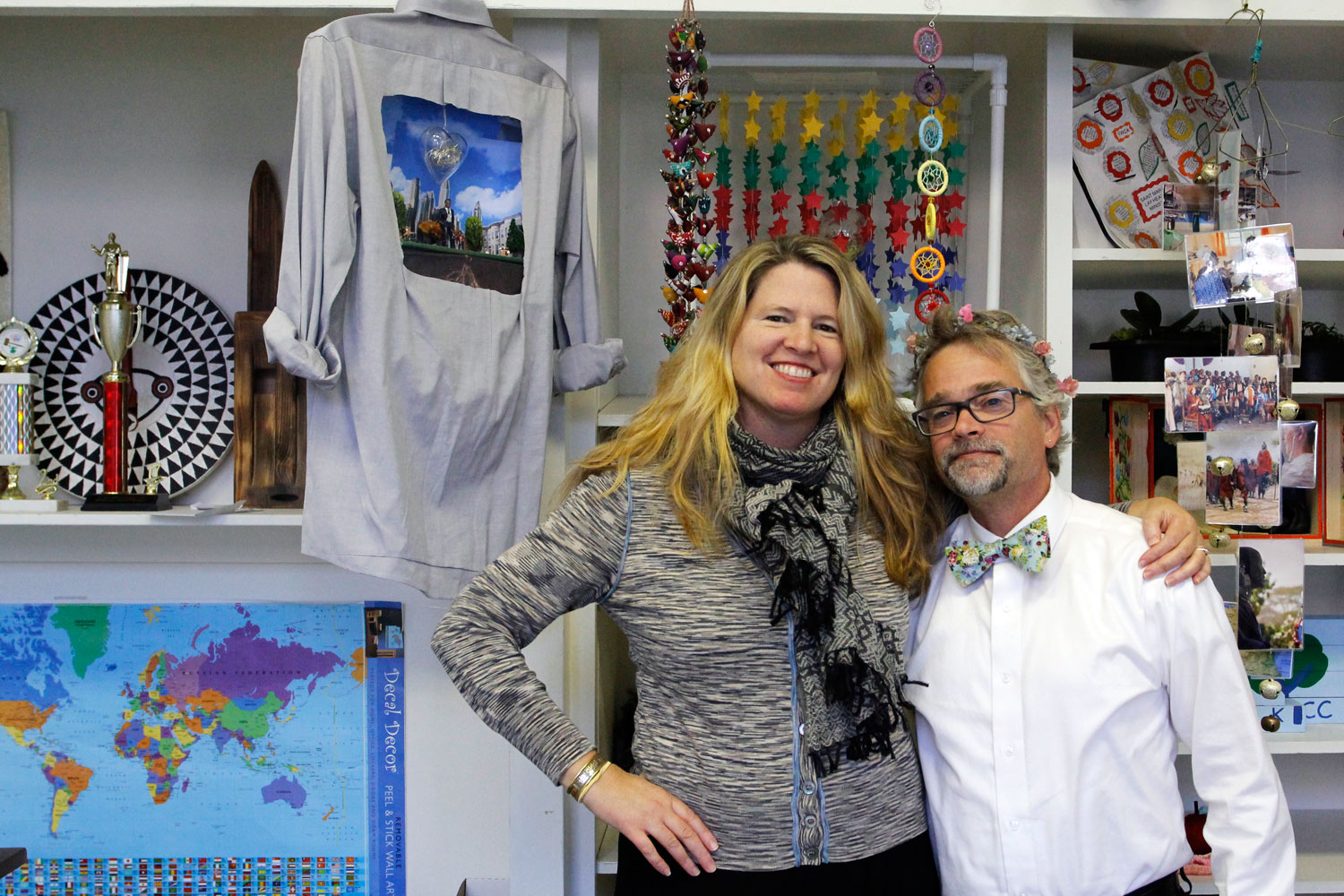 The 7th Grade Cultural Studies program is an interdisciplinary course that combines English (taught by John Cross) and history (taught by Gigi Bizar) to engage students in connecting historical and cultural events.

How did the interdisciplinary Cultural Studies course come about?

Gigi Bizar: John and I started teaching here in the summer of 2005, at the same time, and we immediately had a kinship with each other. We inherited the Cultural Studies class, but it looked very different back then.

John Cross: They were parallel courses rather than interdisciplinary. For instance, we used to start the year by studying Africa, so there was a collection of short stories that they would read while Gigi was teaching them about the history and geography of Africa.

GB: The impetus for a truly interdisciplinary course came about when we realized that we couldn’t teach what we wanted to teach [about the Middle East, a standard part of the curriculum] without the understanding of the Holocaust, which led to us taking a workshop at Facing History and Ourselves [a nonprofit educational and professional development organization], called “Holocaust and Human Behavior.” It really opened up our pedagogical minds and philosophical minds. What we learned there has been the foundation of our work together, and the lens with which their curriculum helps us understand and work with teenagers.

Since then, we have been creating more of an interdisciplinary approach. And it’s evolved into an integrated curriculum, meaning that sometimes, instead of having the kids in English or History, we have them all together and do activities together.

Why do you think interdisciplinary learning is important?

JC: It builds a deeper understanding of ideas. Maybe there’s an idea that we bump up against in a book or in a poem that we’re reading, and then that same idea pops up again in History class. Even on those days when we’re not in the same room, the kids then think, “Oh, we just talked about this. But now we’re thinking about it through a totally different lens.” And I believe that makes for deeper learning.

Your classrooms are incredibly unique. Why use this layout?

JC: One of the things we asked for when we moved into these new classrooms was a door between the classrooms that we could open.

GB: We designed our classrooms for our classes. We remodeled them so they’d be more student-centered.

JC: The open seating allows us to flow from one room to the next so that physically they’re getting the message that English isn’t just in Room W for 80 minutes or 70 minutes. Even now, as we’re engaging in our “Water Unit” [a collective unit in which math, science, history, and English classes come together to learn about the problems caused by a lack of access to clean water], math doesn’t stop over there in the math classroom. The other day, math teacher Valerie Brownsmith and I noticed that the kids were taken aback, asking, “What are we doing talking about math? This is the English classroom!” Yeah, how cool is that; math is a language and look, we’re using math right now to explore this idea.

Why did you decide to teach at Westridge?

JC: I was talking to a prospective student—a 6th grader–the other day, and she asked, “I’m visiting so many schools; what makes this place stand out?” And I told her about my first experience here, when I went through the interview process and taught a class. I remember the 7th graders whom I taught all had name tags on their desks, and one of the kids had written “Peach Blossom” on her name tag. The kids were able to do everything I had outlined and hoped to do with them. I called on Peach Blossom a few times, and she was startled, but then she started to smile and the other kids giggled… and she participated! And I left thinking, wow. At the time, I was teaching undergraduate students at the University of Iowa, and I thought, “These kids at Westridge are so confident and smart and willing to take risks. And they’re in 7th grade! And they’re funny!” I love that. And I think that single-gender education allows for kids to take those kinds of risks, to be vulnerable, to be funny.

GB: I love that students here are so encouraged to take chances, take risks, fail, pick themselves back up again. What was that like? What’s the process? Tell us about it!

Your 7th graders just completed their “Power of One” exhibition. What is the significance of that project and its connection to the community?

GB: I started the “Power of One” project to end the Holocaust and Human Behavior unit by looking at what one person can actually do to effect change. Students focus on one person—an upstander [i.e. someone who sees when something is wrong and acts to make it right­]—in their community and create a presentation on them. I started inviting the upstanders to attend the exhibition. I love that community members come in from off-campus and integrate with our community. It’s this beautiful alchemy.

JC: The kids also research and go out into the community. One year, we brought in two award-winning journalists from the LA Times to talk to the kids about how to interview upstanders. That visit itself was interdisciplinary, because we were in the History classroom, but there were journalists in the room, so the kids were learning skills that you might ordinarily learn in an English class: how do you ask questions, how do you take notes, how do you turn it all into a story?

GB: And they encouraged them to, as much as possible, go to the upstander’s place of business or home so that they could learn more about the person through their environment. So, the kids started to go to the place where the upstander is, and I think it’s helped build a stronger Cultural Studies community.

What do you think makes Westridge special?

GB: My daughter is a student here because I want her to be like Peach Blossom! The kids here are remarkable. They take risks and develop agency. The ideas that they learn here help them understand history and the world and literature, and grow their minds.

JC: When I was sitting with that girl outside and interviewing her, she asked me, “What is it about this place? Why are you here?” She noticed upper school kids and middle school kids walking past, and she said, “Everyone looks so happy here.”

JC: This is an amazing place. The happiness that we see kids express is related to this confidence that they grow and their ability and willingness to grapple with big ideas.

GB: And they’re not hindered by boys; they get to be whatever they want to be without pressure. They grow their voices to be able to speak up and speak out against injustices.

A little more about Gigi Bizar and John Cross:

Gigi Bizar holds a B.A. in Ethnic Studies from Mills College, a women’s college in Oakland. In college, she worked as an after-school program coordinator and Jewish educator, teaching extracurricular evening classes. She received her teaching credential from Mills and moved to Los Angeles, joining Westridge in 2005.

John Cross holds a B.A. in English from the University of California, Los Angeles and an M.F.A. in Poetry from the University of Iowa. Before joining Westridge in 2005, John was an assistant 5th grade teacher at The Oaks School in Hollywood. His poetry has appeared in Volt, Forklift Ohio, Fact-Simile, Lana Turner, New American Writing, Caliban Online, and other journals. “staring at the animal,” a chapbook or small collection of poetry written by John, was published by Tupelo Press (2009).