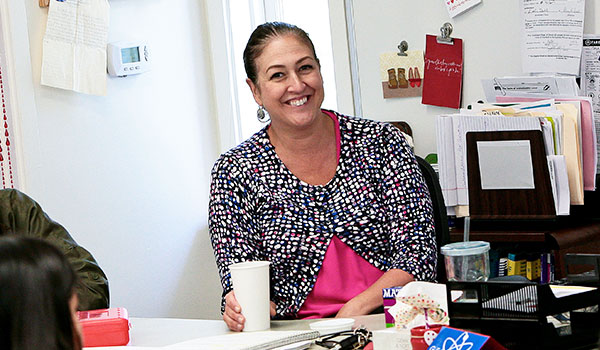 Danielle Houser joined Westridge in 2006 and currently teaches fifth grade mathematics. A graduate of State University of New York (SUNY) at New Paltz, she has two master's degrees from Adelphi University and Ball State University and over two decades of teaching experience. In this Q&A, find out more about her work in the Lower School at Westridge, her passion for teaching girls, and her belief that we are all "math people."

Tell us about your background.

I’ve been at Westridge for 13 years now. Before that, I was teaching in a grades K-12 girls’ school called Chapin School in New York City, where I’m from. I taught math there for five years, and before that I was teaching at a school called the Metropolitan Montessori School for four years. I started my career in the public schools of New York City, teaching in different public schools for five years. So, I’ve taught for 27 years total!

Did you always know you wanted to be a teacher?

I did. I was studying to be a music therapist at SUNY New Paltz (a state university of New York). I played the piano and really wanted to do something with my music. One day, I was helping a friend of mine with her music theory class and she said, “Wow, you know you have a really great way of explaining things.” And I thought, well, maybe I can use those skills to teach.

I started teaching in a self-contained classroom in the public school system, where I taught all subjects. Then I started doing a lot of private tutoring and, as it turned out, many of the students I tutored went to Metropolitan Montessori. The headmaster there reached out to me and said, “I think you should work for us,” and when I went to go teach there, it ended up being the best decision ever. I have stayed in independent schools ever since. Also, Metropolitan Montessori was the first place I’d ever taught just math (as opposed to teaching all subjects) to grades 4-6. It gave me a lot of confidence, and I fell in love with it. I got another degree in math education two years ago from Ball State University.

Like I said, I came from another independent girls’ school in Manhattan, and I loved it—the environment, the way girls are so verbal and engaging in the classroom, everything! So when I started to look for my next job, I knew I wanted to continue working in a girls’ school. I read about Westridge and the minute I came to campus for an interview, I just fell in love with it. I felt so comfortable, and I knew it was the school for me.

With so many different teaching experiences and a variety of subjects in your background, why did you choose to stick with teaching math to fifth grade?

I think it’s a lot of fun! There’s always a way to be creative, because math is a creative subject! Unfortunately, in most traditional classrooms across the country, it’s not often treated as such. But math is not a rote subject or a collection of formulas to be memorized—you can connect art and so many other disciplines to math. I love the projects that we do together that get the students excited about seeing the connections between math and other subjects.

For example, we just finished a unit on area and volume, and they are doing a project where they create an aerial view map of a city. They draw the perimeter of their city on a piece of graph paper, and they find the area in order to plan where the different “buildings” will go on the squares of their graph paper. After they’ve planned their entire map, they make their cities three-dimensional, using more graph paper to create prisms.

Another fun project we do is the Fibonacci number project, which involves the number sequence of the famous mathematician Fibonacci. In this number pattern, each number is the sum of the two numbers that precede it. This series of numbers becomes a pattern that can be found in nature in the form of a spiral (like in pinecones and pineapples and seashells). So, in class we talk about the Fibonacci sequence and then hunt for things outside that look like they might be growing in that sequence.

Teaching lower school is wonderful, too, because while we of course have standards to adhere to, we get to be so creative. We get to do these kinds of hands-on projects that get the students engaged and having fun.

What kind of myths do you think surround girls and math?

Oh, there are so many. You know, like, “Girls don’t have math brains. Boys have math brains.” (Editor’s note: learn more about this in this blog post based on Houser’s research into this topic.) A lot of girls think, even in the fifth grade, that they don’t have a “math brain,” they have a more artistic brain that is better at literature and reading. But there’s no such thing as a “math person.” We’re all math people! We talk about that a lot in my class.

Another myth is that if you are a really good math student, you’re fast, fast, fast! But in the real world, the opposite is true – people who are mathematicians and deep thinkers are working very slowly because what they’re working on is very complex. They take their time. But for some reason, many times that does not translate to the classroom; the kids who get the praise traditionally are the ones who finish first or get it done quickly. And when you’re seeing that as a student, and you have to take your time, the assumption becomes that you’re not good at math. It can be very debilitating. So in my classroom, I try to get ahead of that issue early and create a strong foundation to help them build confidence in the way they each approach the subject. I also work a lot with my students on creating an environment where they’re comfortable making mistakes.

Is that part of your teaching philosophy?

Absolutely. My teaching philosophy is to help students learn math at the deepest level and to have fun with it. Have a playful attitude about your learning. Mistakes are part of the learning process, and actually, if you’re not making mistakes, then I’m not doing my job, because it’s too easy for you! If it’s harder and you’re making mistakes, that’s really good. That’s teaching math with a growth mindset.