← Return to blog
Myth Busting about Girls and Math: Teaching Math with a Growth Mindset to Girls
October 16, 2019 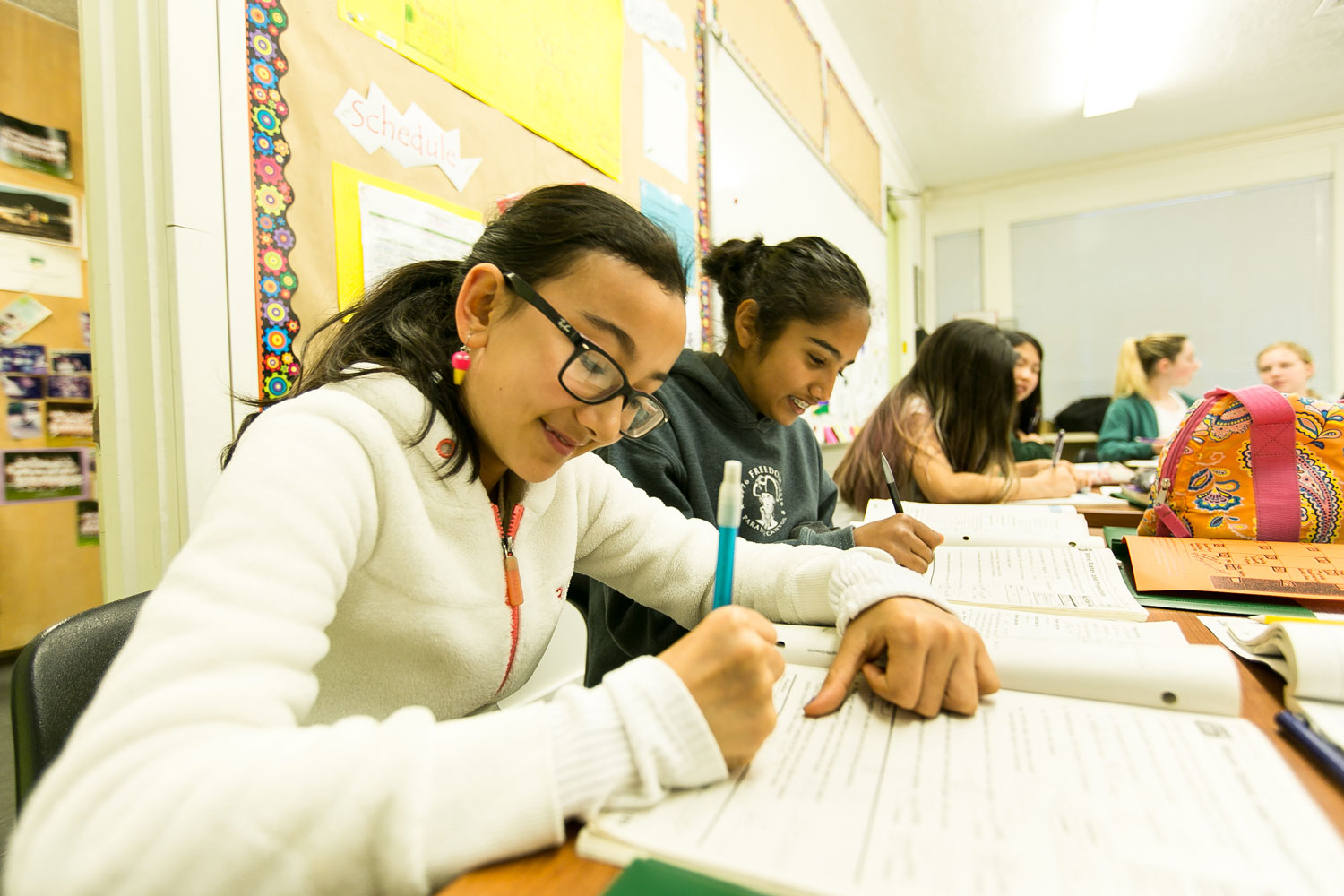 Fifth Grade Math Teacher Danielle Houser is on a mission to have all girls love math―or, short of that, to understand that they are supremely capable of doing high-level math.

Her path started when reading the book Mindset: The New Psychology of Success by Carol Dweck. It continued in online courses and workshops with leading math education reformer Jo Boaler of Stanford University where she expanded her understanding of fixed and growth mindsets (the understanding that abilities and intelligence can be developed through work and are not fixed based on innate gifts) and how they can be applied in the math. And it made its way into Houser’s master’s research, “The Effects of Teaching Math with a Growth Mindset to Girls,” which dug deeper into the works of Dweck and Boaler.

Dweck and Boaler’s research on brain plasticity and its implications for learning mathematics had a profound impact on the way Houser teaches math to fifth-grade girls. The foundation of her approach is overt, ongoing conversations about growth mindsets with her students. (Her classroom is covered in mantras such as “If I Don’t Understand Something, it is Because I Haven’t Learned it YET” and “We Value Depth Over Speed.”) “A growth mindset is deeply connected to all student motivation,” said Houser. “But it is particularly essential in math, and especially for girls, because of the negative stories told about people lacking ‘math brains’ and about girls not being as good as boys in math.” When students, especially girls, believe in fixed mindsets, they don’t cope with the confusion of the early stages of learning a new concept or subject and they can shut down.

"A growth mindset is deeply connected to all student motivation. But it is particularly essential in math, and especially for girls, because of the negative stories told about people lacking ‘math brains’ and about girls not being as good as boys in math.”

On top of using growth mindset to inoculate girls from persistent misperceptions about math abilities, Houser employs teaching tailored to female students. According to Houser, traditional math education sets girls up to fail by focusing on getting the right answer fast, rather than on thinking deeply about how you get to the answer. While females are just as capable as males of working at high speed, Boaler’s research has found that girls are more likely to reject subjects that do not give access to deep understanding.

Houser shifts the emphasis in her classroom from procedural problems where students solely rely on memorization of traditional algorithms in order to get the “right” answer, to problems where students are “doing math” and explaining their solution strategies. Doing math tasks provides more challenge and rigor because of the higher cognitive demand they place on students. For instance, rather than ask students to simply figure out the area of a bulletin board with the dimensions of 4 1/3 feet x 8 feet, Houser follows up this procedural task with an extension problem requiring students to calculate the number of square pieces of paper with a length of 1/3 foot that could fit on the bulletin board without overlapping. Students must still know how to calculate area, but this question challenges them to take their thinking deeper.

During collaborative group work, Houser follows the framework known as Complex Instruction (CI). Developed by Elizabeth Cohen and Rachel Lotan, CI is an approach teachers can use in order to make group work more equitable for all types of learners. Group work can be problematic for many teachers because of varying levels of ability in a typical classroom. Quite often, higher-ability learners are expected to do more than their share of the work, while lower-ability learners sometimes add little to the conversation and task at hand. In this kind of collaborative setting, both ability groups will end up feeling frustrated after the task is completed, and unfortunately the lower-ability students will be left with gaps in their learning. In a CI classroom, students work together on rich problem-solving tasks known as low-floor/high-ceiling tasks (LFHC). LFHC tasks allow Houser to differentiate and meet the needs of higher-ability learners by offering challenge extensions for the same task. These tasks are completed in small, mixed-ability groups of three to four students where every student is held accountable for their understanding and mastery of the task. This means that everyone in the group needs to ask important clarifying questions if they don’t understand someone else’s strategy. Meanwhile, Houser circulates to each group, listening to the discussions to see if each member demonstrates complete understanding. If this does not happen, Houser instructs all group members to return to their task and discuss the problem so that all students understand. Through it all, Houser puts emphasis on student effort instead of ability, while having high standards for everyone in the class.

In addition to allowing for a curriculum based in best practices for teaching elementary mathematics, girls’ school offer a cornucopia of peer role models of girls loving and excelling in math – because all students filling these roles are girls! According to the National Coalition of Girls’ Schools, that is a major reason why graduates of girls’ schools are six times more likely to consider majoring in math, science, and technology in college, and three times more likely to consider engineering, compared to girls who attended coed schools.

What can parents do to help ensure their daughters don’t buy into the myths surrounding girls and math?

And if you have boys, this advice will be helpful to them as well. As Ms. Boaler stated in the New York Times, “The lovely thing is when you change math education and make it more about deep conceptual understanding, the gender differences disappear. Boys and girls both do well.”

Share to FacebookShare to TwitterShare to LinkedInShare to PinterestShare to EmailPrint this page
Log in to post a comment:
How to Prepare a Shy Student for the Private School Admission Interview
Top 2 Tips from a Private School Admission Officer
An Admission Director’s Thoughts on Getting to Know Schools from a Distance
Head of School Elizabeth J. McGregor's Remarks on "Surgere Tentamus" at Convocation 2020
Decision Time, Part 1: How Do Private Schools Make Admission Decisions?